The mechanics of Relay and Baton Exchange 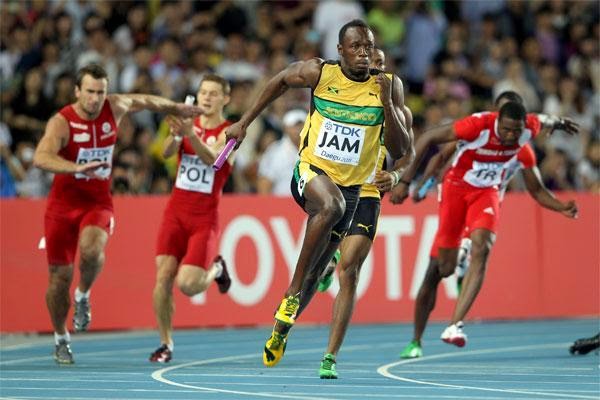 Relays in athletics are the time when athletes get to come together as a team (usually made up of 4 athletes), passing a baton from one teammate to the other. The ultimate goal of the relay is to move the baton around the track and across the finish line in the fastest way possible without getting disqualified. There are two main types of relays which are the 4x100 metres and the 4x400 metres.

In the 4x400 metre relay, each member of the team must run a 400 metre leg of the race. The lead-off runner must stay in lane for the entirety of the 1st lap as well as the 1st 100m of the 2nd lap, after which runners do not have to stay in their lanes. Each runner must carry a baton during his or her leg and hand it to the subsequent runner within the changeover zone, which is sited 10 metres either side of the finish line. The receiver of the baton looks at the incoming runner who is moving at a slower speed and must concentrate on taking the baton out of the incoming runner's hand rather than being "given" the baton. Baton changing is therefore Visual


In the 4x100 metre sprint relay, each member of the team covers a distance of 100m before handing over the baton. The rules require the baton to be exchanged within a 20 metre changeover zone which is situated 10m before the start of each subsequent leg. This is to enable the incoming runner place the baton in the hand of the outgoing runner when he or she has achieved maximum acceleration. The receiving athlete can commence his or her run 10 metres before the changeover zone known as the acceleration zone.

It is important to note that for both relays, when the baton is exchanged outside the changeover zone, a team is disqualified even after finishing the race.

There are various techniques employed in baton exchanging but 3 are most popular. The major distinction between the 3 is in the positioning of the hand and fingers and the way the baton is placed in the outgoing runner's hand.

The second type is the Downsweep Technique. In this technique, the receiving hand of the outgoing athlete is extended behind just above hip height, with the palm facing up and a wide angle between the thumb and the rest of the fingers. The incoming athlete passes the baton in a downward movement into the receiving hand. The advantage of this method is that it will require no manipulation of the baton to safely make the next baton exchange. A disadvantage is that it is not a natural position of the outgoing athlete's hand to receive the baton. 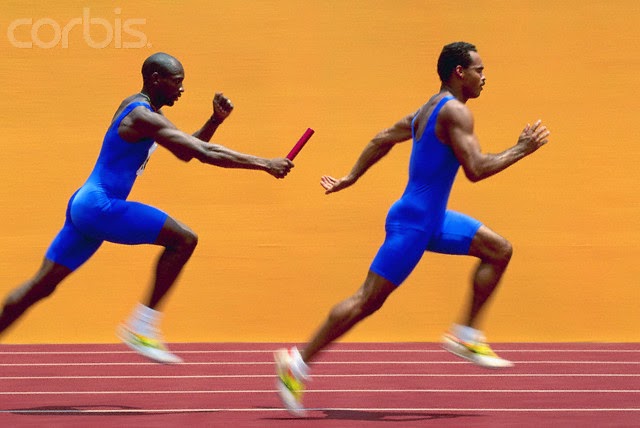 The third technique is the Push Pass Technique. Here, the outgoing athlete's arm is extended out behind parallel to the ground and the hand is open with the thumb pointing down. The incoming athlete holds the baton vertically and pushes it straight into the open hand.  The advantage is the the incoming runner can easily adjust the baton’s position up, down or sideways and can observe the outgoing runner's hand take hold of the baton. It will require no manipulation of the baton by the outgoing runner to safely make the next baton exchange. A disadvantage is that it is not a natural position of the outgoing athlete's arm and hand to receive the baton. This is perhaps the safest method of baton exchange. 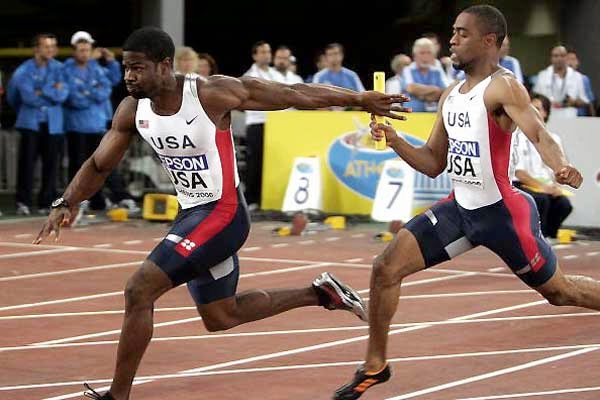